The Collective Benefits of Extreme Wealth

Wealth inequality has been increasing in many countries lately, and in fact it has been rising sharply in the world as a whole over the last few decades.[1] 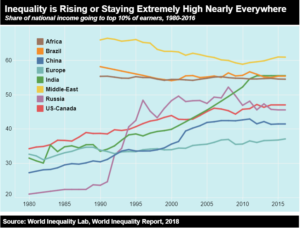 News headlines are often filled with names like Jeff Bezos, Elon Musk, Mark Zuckerberg, and other “centribillionaires” whose wealth seems to be growing exponentially, limitlessly. For the millions of largely unknown individuals living at the other end of the wealth spectrum, such wealth must surely seem unfathomable, unreal.

But is extreme wealth always bad?

Perhaps this is a provocative and controversial question in some circles, but it’s one worth asking.

To be clear, it’s not about doubting the extent of today’s wealth inequality, or the profound problems of extreme poverty. According to Inequality.org, a website maintained by the progressive think tank Institute for Policy Studies in Washington D.C., the United States is by far the most unequal country among the industrialized nations of the OECD, with 42.5% of its national wealth and income owned by its richest 1%.[2] Globally, the Credit Suisse Global Wealth Report found that the world’s richest 1%, those with more than $1 million, own 44% of the world’s wealth.[3]

While the accumulation of wealth by some may not inherently be a bad thing, the problem is that there are so many others suffering from a complete lack of it, and the two extremes are ultimately linked. As summarized by Inequality.org, “[t]hose with extreme wealth have often accumulated their fortunes on the backs of people around the world who work for poor wages and under dangerous conditions.” 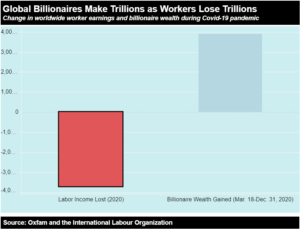 Most people would probably see such extreme disparities as wrong, bad, and problematic (whether their views align with where they fall within that disparity is an interesting question outside the scope of this post.) Whether we are talking about wealth, vaccines, or any other markers of human well-being, inequality inherently seems bad, unjust, and undesirable. The very definition of unfair.

Or, putting aside such loaded and abstract terms, maybe the better line of questioning is this – what are the upsides of accumulated wealth and how can those be maximized for the benefit of all, while still minimizing or alleviating poverty?

I frequently go to the Huntington Library, Art Museum, and Botanical Gardens with my husband and son. Located in the affluent neighborhood of San Marino, the Huntington consists of an extensive research library and art museum, with hundreds of thousands of valuable written and artistic work, as well as 130 acres of botanical gardens over a total area of an impressive 207 acres. 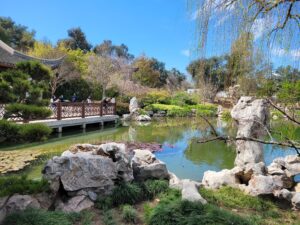 The institution was originally the private estate of Henry and Arabella Huntington. Henry Huntington amassed his wealth as a railroad and real estate businessman with his uncle Collis P. Huntington, and after his uncle passed away, he married Arabella, his uncle’s widow. During my last visit, I saw a poster about the couple, and it said that they wanted to share their collections with the public, so in 1919 they transformed their private estate into a public institution and opened it up to the public. According to their website, the Huntingtons’ gift of their estate, collections, and an endowment of $8.5 million in 1927 reached a market value of a whopping $500 million in 2019.

Had it not been for their astounding accumulation of wealth, the Huntingtons would not have been able to collect such valuable art pieces or create such extravagant gardens and offer them to the public. And such expensive assets would not be sustainable without the generous on-going donations of other wealthy patrons. Without these massive financial contributions from wealthy private individuals, it’s hard to imagine such costly institutions ever being built – either by the government or otherwise.

History is full of such major advancements or accomplishments being made as a result of massive wealth. World-wide expeditions were funded by rich monarchs and merchants, mystifyingly large pyramids were built by powerful and wealthy pharaohs, and rich patrons around the world funded so much of the architecture, music, and artwork that are still considered the pinnacle of human achievement today. Again, the downsides of some of these accomplishments are clear, such as the slave labor that was used to build the pyramids and the devastation of indigenous people at the hands of foreign explorers. But there is no doubt that humanity has been shaped and defined by these achievements, and they would not have been possible without the extreme wealth of a few.

Today, humanity continues to be shaped and defined by a small number of extremely wealthy individuals. The wealthiest people in the world right now are Jeff Bezos, Elon Musk, Bernard Arnault, Bill Gates, Warren Buffett, and Mark Zuckerberg, all practically household names and most with bona fide celebrity status.[5] Individually, these men have more wealth than many countries, and their power over technology and other key aspects of our modern lives means that they have tremendous influence over this entire planet and beyond, literally.

Indeed, one key area where such billionaires are currently leading the way is in space travel and exploration. Once possible for only the most powerful nations, the field is now dominated by billionaires such as Jeff Bezos, Elon Musk, and Richard Branson, whose ambitious plans for commercial space travel are radically changing the game for all. A recent NY Times article profiled Richard Branson and his company Virgin Galactic, admiring the “grandiosity” of the attempt to “normalize space travel and achieve what has historically been the domain of only the most powerful governments,” while also seeing it as “a tale about excessive wealth and ambition.”[6] Whether Branson’s wealth is “excessive” probably depends on who you ask, but what seems undeniable is Branson’s ambitious projects are the type of cutting-edge work that promises to shape the future of humanity, and that would be extremely difficult or even impossible without such concentration of wealth.

Perhaps this is just the natural order of societies, with the wealthy few exerting disproportionate power over society. It’s like a natural habitat where a few top predators are sustained by many more smaller animals below the food chain. The world has never seen a successful nation that is fully communist or socialist,[7]  which suggests that full equality – at least in an economic sense – just doesn’t work.

Instead of demonizing the wealthy or eliminating their wealth, perhaps the better approach is to work with them, to increase their sense of goodwill towards others and to help them find good uses for their money. This is not just for the sake of others but for their own sake as well. Numerous studies have shown that the wealthy are not always the happiest; in fact, it has been shown that after reaching around $70,000 in annual income, happiness tapers off and doesn’t increase with increased income. At the same time, being altruistic and giving to others has been shown to consistently increase happiness and improve one’s own well-being.

Many wealthy individuals want to and in fact do give to charitable organizations, and since they are not subject to as many restrictions and rules as governments and government officials, private individuals can often execute solutions more effectively and efficiently.

The main goal here seems to be partnership, between the wealthy and the poor, and between private and public entities, to find the best use for the resources available. With the right balance of responsibility, accountability, and creativity, the extreme wealth of a few can result in benefits for all.

[1] While wealth inequality has been rising in recent decades, that doesn’t necessarily mean it has been rising throughout human history, or that it’s currently the highest it’s ever been. The richest person in the history of the world is said to be Mansa Musa I of Mali, ruler of the Malian empire born in 1280. He is reported to have had an estimated value of $400 billion, acquired mostly from the production and trade of salt and gold, more than half of the world’s supply at the time in fact. There was no globalized economy back then like there is today, so it’s difficult to compare wealth inequality back then to what it is today, but it seems clear that wealth inequality wasn’t always rising throughout human history. In the last century alone, inequality has fluctuated a lot among and within different countries.

[3] Credit Suisse defines “wealth” as the value of a household’s financial assets plus real assets (principally housing), minus their debts.

[5] Case in point, the recent tabloid coverage of Jeff Bezos’ affair with former newscaster Lauren Sanchez was as salacious and titillating as that of any Hollywood star.

[7] There are many prosperous nations with socialist policies, like Denmark, Sweden, and Bolivia, but these countries also have free markets and other elements that arguably do not make them a true socialist system.