My 7-year-old niece is a beautiful, precocious, and brilliant little child. Watching her learn and grow is like having a direct window into the human condition, like watching the evolution of all humanity.

Several years ago, when she was 3 or 4 years old, there was an incident when my mom was babysitting her. My niece was eating a bag of chips when somehow the bag of chips fell, scattering the chips all over the floor. She bent down to eat them but my mom brushed her away, telling her not to eat the dirty chips. My mom then got her broom and swept the chips into the dust pan. Momentarily crushed, my niece then regained her spirits and plopped down on the floor, happily picking up imaginary chips from the floor and popping them into her mouth.

My mom and I had a huge laugh as she recounted the story to me later that day. Aside from the utter cuteness of it, I was also struck by the powerful resilience and spunky spirit shown by my niece that day. She didn’t cry, throw a tantrum, or otherwise let the discarded chips bring her down. Instead, she processed her disappointment and then gathered her wits to go on and do what she had intended to do, eat yummy crunchy chips even if they were no longer there.

I think about all the times when I let my own disappointments derail me, and I’m inspired to rediscover that unbeatable spirit within me that I know every child has (or had). Sure, life’s challenges become bigger as we grow older, but that simply calls for more resilience, not less.

This world can be a tough place to live in, and there are many times when good, hard-working people will be cheated or deprived of the various wants and needs of life. What to do then? It seems like a hollow answer, an insult really, to say that someone should just pretend to have what they want or need when they don’t in fact have it. Let them eat cake! So said the ignorant and indulgent Queen Marie Antoinette of France, as the people of her country starved. (Whether she actually said that is up for debate, but moving on.)

Such a quip may not solve the more serious needs of our lives, but I think that attitude of ‘I’m going to have it, whether I actually have it or not’ is a source of potentially unlimited strength and power. Such a bold, hearty spirit may not literally fill an empty tummy or put a roof over one’s head, but it may just be enough to get someone through that one dark moment, until the next reprieve will come. And in the unrelenting ups and downs of life, those momentary flashes of spunk and grit may make all the difference over the course of a lifetime.

So let us all have our chips, and eat them, too.

A while ago, I was listening to a discussion on NPR about the Trump administration and its drive to ‘win’ at all costs, including at the cost of things like decency, morality, and the truth. I agree with the speaker’s assessment; Trump is a master of manipulating the public and the media, and he and his co-horts will do anything to “win.” And to that end the lies flow out of him and his administration so quickly and rapidly that it’s hard to keep up.

Some of those who support Trump are equally willing to go to any lengths to defend him. They condemn liberal media for wanting to attack Trump, and any kind of criticism or judgment levied against Trump is a flat out lie or biased partisan attempt to bring Trump down. Every new event or statement coming out of the White House triggers another tussle between the right and left over the real version of what happened, the real version of the “Truth.”

Full disclosure, I am a Democrat and a liberal, and I get most of my news from NY Times and CNN. For many reasons which I won’t get into here, I align with the left more. But this post isn’t about the left versus the right; rather it’s about the supposed monopoly over the truth that both sides claim to have.

The liberal media has certainly made mistakes as well, and I am not saying that the left is always right and that the right is always wrong (and that wrong is always right? =P) I try my best to stay mindful of my own biases; I even downloaded the Fox News app on my phone so I can periodically listen to ‘the other side’ to get a reality check.

There are certain facts that are pretty much irrefutable by intelligent, reasonable people (like the law of gravity), but I think such facts are actually very limited. Most ‘facts’ in life are highly subjective and contextual, and it’s difficult to come to a real consensus about the Truth.

Whenever there are conflicting views or claims on the Truth, there are usually at least some facts or beliefs that the different sides agree on, and I think we should focus on those in order to start working towards a compromise. The way I see it, it’s like a Venn diagram; there is my truth, and there is the other’s truth, but there is a core Truth that is shared by both, and by starting from there we could perhaps even expand that shared ground and reconcile our different truths.  That is assuming, of course, that both sides are willing to cooperate.

So that was my philosophical musing on the topic of the truth. To conclude, I will leave you with this little mind twister:

Everything I say is a lie.

What is “Reality,” and how do we define it? Does absolute reality exist independent of our observations? And how do we coexist in society if our personal realities conflict?

A year or two ago, I was fascinated to learn about the double-slit experiment, which sought to determine the fundamental nature of matter and whether it consisted of waves or discrete particles.

In the experiment, first carried out by Thomas Young in the early 1800’s, light (a form of matter) was sent through a wall with two narrow slits. Behind the wall was another wall which captured the light coming through the slits. The experiment showed that when light went through the two slits, it behaved like waves, with the light from each slit interfering with the other and creating a rippled pattern on the back wall. 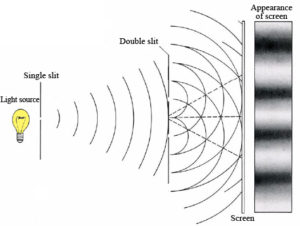 In conclusion, experimenters found that matter behaved both like waves and like particles, and the mere act of observation could change it from waves to particles. This finding revolutionized the field of quantum mechanics and still remains unexplained today, leaving in place large unanswered questions about the nature of matter and whether objective reality even exists.

If this doesn’t send your mind into a tailspin, I don’t know what will.

Most of us go about our days treating our personal realities as if they were the absolute reality, and indeed society would fall apart if we all went about questioning the existence or truth of everything. At the same time, that is what causes people to live in alternate and conflicting realities, even as they share the same households, religions, or socio-economic status.

We humans are a social, relational creature, and we are constantly organizing and labeling ourselves in ways that both unite and divide. But right now, the sense of division is at an all-time high in the world, both in my home country, the United States, and my birth country, South Korea.

In both countries, political divisions have become so heated and so deeply personal as to become an epic battle over reality itself.  Each side is so fiercely entrenched in their own version of reality that they cannot see anything from the perspective of the other. In such a divided environment, how can we ever find common ground for people to work and live together?

I think the greatest source of hope lies in the very phenomenon that gives rise to this conflict; if our perceptions dictate our realities, and we can choose what we perceive, then we can always choose to perceive in ways that harmonize and don’t conflict with the others. 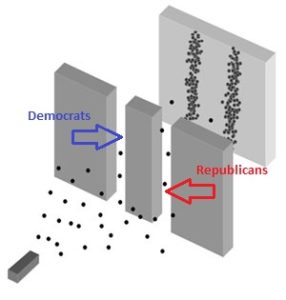 Easier said than done, I know, but I think the mere awareness of this choice alone will radically change the way we relate to each other. If we don’t pay attention to the differing versions of reality and talk at each other in a messy undiscerning environment, all we will get is a chaos of waves and ripples with conflicting and interfering beliefs. But if we take a moment to see through the lens – or the slit – that the others are seeing through, maybe we will find an orderly procession of thoughts and beliefs that can run parallel to each other, even if they never coincide or merge.

Differences among people are inevitable, and therefore a certain level of conflict is also inevitable. But the same exact thing can be said for similarities and harmony, and it’s up to each of us to decide what to focus on.

At the intersection of our differing truths is a mutual truth, or mutual reality, a common ground upon which we can find mutually beneficial solutions to our problems. That is my truth, and that is how I choose to see it.